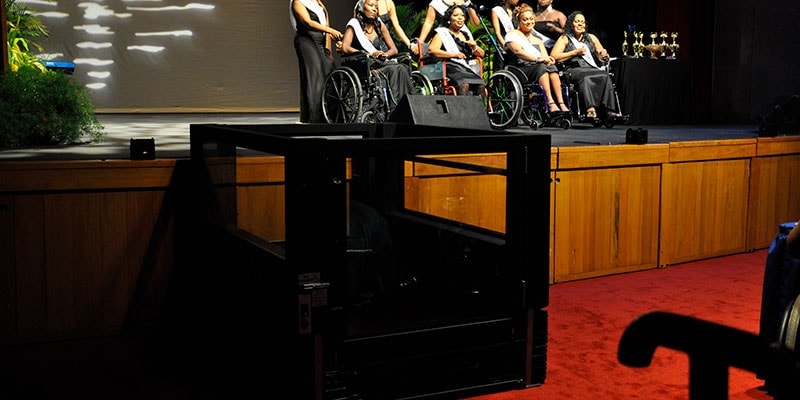 Queen’s Hall Theatre in Trinidad and Tobago has been pushing for community growth since it opened its doors in 1959. Since that time, the theatre has undergone numerous renovations to ensure that it remains on the cutting edge of international trends. These renovations include the enclosing of the auditorium to provide air-conditioning and improved lines-of-sight, as well as the enlarging of the stage. Over recent years, their focus has been on providing equal access for all individuals, including those with disabilities.

“One of the major problems facing the differently-abled community has been inclusion. Far too many places are not accessible for the differently-abled and we need places to be equipped with rails and ramps to accommodate persons in wheelchairs. To take a few words out of our national anthem, it certainly made us feel like, ‘every creed and race finds an equal place',” said Beverly Jackson, Founder and Executive Director of the Organizing Committee for the Miss Trinidad and Tobago Differently Abled Queen Show, held at Queen’s Hall.

In order to address this concern, Queen’s Hall theatre recently purchased an Ascension Virtuoso portable wheelchair lift. Their new lift enables individuals who may be in wheelchairs or require special accommodations to gain access to and from the stage with ease. Queen’s Hall Chairman, Dr. Helmer Hilwig, noted that, “The acquisition of the Ascension [Virtuoso] wheelchair lift was yet another step towards ensuring that all users of Queen’s Hall are adequately facilitated.”

Furthermore, their lift represents an attractive accessibility solution to their theater, as its quiet operation does not interrupt a performance or draw unnecessary attention to the passenger. This enhances both the dignity of the passenger, as well as the image of their facility.

As a leading Performing Arts Center, Queen’s Hall caters for the differently-abled community through:

Ascension’s wheelchair lifts can also be found in several other noteworthy institutions throughout the United States, including Radio City Music Hall, Jazz at Lincoln Center and the John F. Kennedy Center for the Performing Arts.