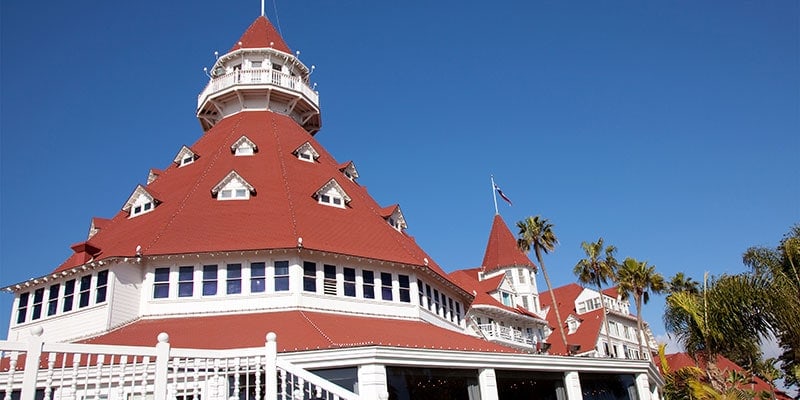 Recognizing the need for integrated accessibility, the Ascension product line is designed to provide floor-level access without the need of an entry ramp or installation pit, removing the need to damage the flooring of a property to accommodate the lift. Furthermore, all Ascension lifts are low profile and unobtrusive, making them a preferred choice over wheelchair ramps and architectural alterations.

Below, we spotlight five high-profile historic properties that have successfully made accessible modifications by incorporating Ascension wheelchair lifts:

The Hotel del Coronado opened in 1888 and is a frequent stop for presidents, celebrities, visiting dignitaries, and many others. In addition, due to its location on Coronado beach and its striking Queen Anne Victorian architecture, the hotel has been featured in movies, such as “Some like it Hot” and “The Stunt Man.”

As a luxury resort, the Hotel del Coronado has undergone many enhancements over the years. Therefore, in 2012, the hotel invested in a portable Ascension Protégé wheelchair lift. The Protégé’s portability makes it easier for the Coronado to host accessible events, such as weddings, conferences, and banquets. In addition, the small footprint of the Protégé and its elegant aesthetic provide accessibility without damaging the historic value or diminishing the charm of the Hotel del Coronado.

“Wow, what a well-built piece of equipment. Easy to unload, easy to operate and made in America. The set-up DVD is really well done and Ascension personnel are easy to work with. Congratulations on producing a fine product!”

Built in three distinct architectural styles and displaying thousands of historic artifacts, the 147 year old American Museum of Natural History (AMNH) hosts millions of visitors each year. Museum patrons take part in numerous events put on by the museum, such as tours, sleepovers, live animal exhibits, and movies or lectures in their theaters.

In order to preserve a focused educational experience for their guests while, at the same time, creating accessibility for daily operations, the AMNH invested in a portable Ascension Virtuoso platform lift for one of their theaters. The floor-level access of the Virtuoso provides ease of use, while the ultra-low profile aesthetic maintains a low visual impact. Furthermore, the Virtuoso’s vibration isolating motor supports dampen operational noise, which may otherwise disrupt museum tour groups or theater attendants.

Established in 1845, the U.S. Naval Academy has played a significant role in every American military conflict since the Civil War. As an institution steeped in tradition, the Academy hosts many events in an effort to inspire the individuals who attend and visit the Academy, such as lectures, classes, ceremonies, and community gatherings. In order to ensure their values and history would be accessible to all, the U.S. Naval Academy invested in an Ascension lift to provide accessibility for those attending such events at the Alumni Hall.

As the oldest Ascension platform lift on this list, the portable SLA 2050ESD has been at the Academy since 2004 where it is being used to access a portable stage in the Alumni Hall for ceremonies and lectures. Though the SLA series has been discontinued, the lift still exemplifies the foundations of the modern Ascension product line by providing open lines of sight through four clear window panes, low noise operation, and ease of use.

"Alumni Hall at the United States Naval Academy is a multipurpose building that changes from concerts, to sports, to lectures, to Fine Arts almost daily. Because of these varied uses our stage is never in one place very long. The Ascension wheelchair lift is very user friendly. It rolls into position easily and the walls are see through which helps lessen the feeling of being in a box. There have been no problems with the door switches or safeties. I highly recommend [an Ascension lift] for any building needing a reliable portable [lift]. We have had ours for several years and are very pleased with it."

Navy Pier has been many things during its lifetime: a docking yard, a Navy training facility, a university campus, a commercial shipping hub, and, finally, a place of public recreation. Today, through the influence of the Navy Pier’s managing body, the Metropolitan Pier and Exposition Authority (MPEA), Navy Pier stands as one of the Midwest’s largest tourist spots, attracting around nine million visitors annually. Now in its 100th year, Navy Pier blends modern attraction with Chicago history, as embodied in its Aon Grand Ballroom.

Due to the history surrounding Navy Pier and its use as a cultural center, the MPEA, concerned with providing equal accessibility, invested in a portable Ascension Virtuoso wheelchair lift to provide access to the five-foot stage in the Navy Pier’s Aon Grand Ballroom. Built in 1916, the Aon Grand Ballroom holds up to 1,400 people for dinners, galas, concerts, and other events at Navy Pier. Due to the Ballroom’s varied uses, the quiet operation and distinguished aesthetic design of the Virtuoso made it the ideal choice over other accessibility solutions.

The Empress Theatre was built in the Beaux-Arts architecture style; though, of the original design, only the exterior remains. A fire in 1930 consumed the inside of the theatre, and an earthquake in 1989 led to greater damage. Furthermore, changes in ownership left the theater with little repair or improvement over the next 24 years. However, amidst a burgeoning arts community taking root in Vallejo over the past decade, the Empress Theatre has once again found new life.

After years of renovation, the Empress Theatre is fully refurbished and offers modern accessibility with a portable Ascension Virtuoso wheelchair lift for its stage. As the heart of the Vallejo arts community, the Empress Theatre hosts a range of events, such as concerts, comedy shows, and films. As such, the lift makes it possible for disabled community members to access the stage during and after performances. Incidentally, due to the diverse age group of the theatre’s patrons and the nature of its business, the protective rigid safety skirting and quiet operation of the Virtuoso are useful to the Empress. However, it is the ultra-low profile and small 4’ by 5’ footprint of the Virtuoso that are the most important features for the theatre, as installing a ramp into the Empress Theatre would have been very difficult.

"The Ascension unit was by far superior with the lack of a tower above the top of the lift. This unit does not extend up into the visual space of our stage floor. It does seem to be the Cadillac of ADA lifts and it is USA made. The lift is ready to serve our patrons."

For information about Ascension lifts, please contact Ascension here, or call (520) 881-3993 to speak with a representative directly.

If you are interested in accessible renovations for a historic or other property, read “How the ADA Affects Renovations.”

For information about historic preservation or to see if your property qualifies for historic registration, see the National Trust for Historic Preservation website.