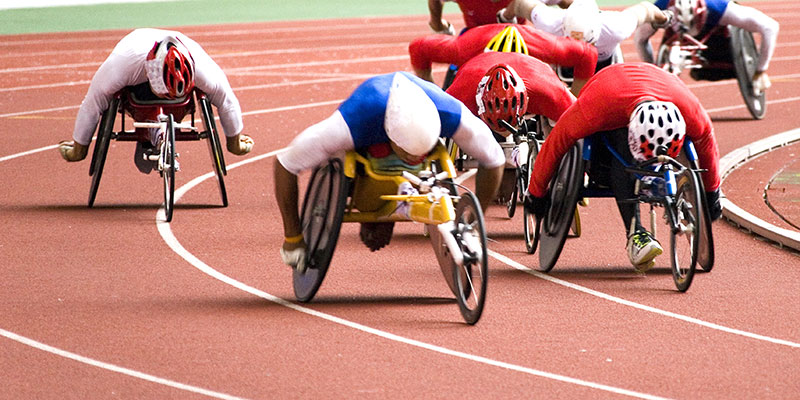 The United States has an impressive track record in the Paralympics, having won over 500 gold medals since the first Games in 1960. This year, more than 4,300 competitors from 160 different countries are expected to participate at the Paralympic Games in Rio de Janeiro.

Many of these competitors are either current students or alumni of the various adapted athletics programs from across the U.S. so, in celebration of the upcoming Paralympic Games this September, we take a look at some of the adaptive athletics program in the U.S. and a few of their Paralympians helping Team U.S.A. go for gold in 2016.

The University of Central Oklahoma (UCO) supports wheelchair basketball and sitting volleyball, as well as an inclusive recreation program featuring wheelchair tennis, table tennis, and more. UCO is also host to the Endeavor Games; an annual adaptive athletic competition bringing together hundreds of athletes with disabilities over the past 16 years. Due to their history with the Endeavor Games, UCO has been named one of 18 Olympic and Paralympic training sites in the U.S., and the only university to be assigned the designation.

Rio Star Spotlight: Heather Erickson – At 23, Erickson is the youngest player on the U.S. Women’s Sitting Volleyball team, and current team captain heading to Rio this year. Having won a silver medal in each of the previous two Paralympic Games, Rio will mark Erickson’s third consecutive Paralympic appearance. Erickson is a current student at the University of Central Oklahoma and a 2016 ESPY finalist for Best Female Athlete with a Disability.

University of Alabama and Mackenzie Soldan

Rio Star Spotlight: Mackenzie Soldan – A graduate student at the University of Alabama (UA), Soldan was a Collegiate National Champion in 2015 and is a returning competitor for the 2016 Paralympic Games in Rio. After winning two gold medals at the 2012 London Paralympic Games, this year’s competition marks her second consecutive appearance in the Paralympics.

University of Illinois at Urbana Champaign and Christina Schwab

The University of Illinois at Urbana-Champaign (U of I Urbana-Champaign) claims the oldest disability resource program of its kind in the nation. Founded in 1948, U of I’s adaptive athletics program features wheelchair basketball and track and field programs. In addition, U of I is a partner in the NCAA inclusion initiative, producing annual reports concerning integration in school systems and collaborating with the Institute for Human Centered Design and the National ADA Network.

University of Missouri and John Gilbert

Over the last ten years, the University of Missouri (UM) men’s wheelchair basketball has grown from a small and unknown team into a leading adaptive athletics program competitive in the National Wheelchair Basketball Association. After turning the wheelchair basketball program around, four of the five original Missouri Tigers had their jersey numbers retired in honor of their accomplishments in 2010; one of those players was Paralympian John Gilbert.

Rio Star Spotlight: John Gilbert – Currently a science teacher in the Salisbury Missouri School District, Gilbert set a UM record as the Missouri Tigers’ leading scorer with 2,119 points over the course of his college career. Now, after helping Team U.S.A. win a gold medal at the 2015 ParaPan Am Games, John is headed to his first Paralympic Games in Rio this summer.

Rio Star Spotlight: Trevon Jenifer – Jenifer was captain of the wheelchair basketball team while attending Edinboro College, and named an All-American twice before graduating in 2011. He has played professional wheelchair basketball in France for Le Cannet, winning the All-Tournament, and he won a silver medal in the 2014 Wheelchair Basketball World Championships. After winning a bronze medal at the 2012 Paralympic Games in London, Jenifer is heading to Rio this year for his second Paralympic appearance.

University of Texas at Arlington and Aaron Gouge

The University of Texas at Arlington (UTA) has won seven national championships since entering the National Intercollegiate Wheelchair Basketball Division in 1989, and is currently aiming for their eighth. The UTA adaptive recreational athletics program offers many inclusive athletics, such as adaptive soccer, tennis, billiards, badminton, football, basketball, and boccia, while offering full athletic scholarships to players on their adaptive teams.

Rio Star Spotlight: Aaron Gouge –Gouge graduated from the University of Texas at Arlington in 2009, where he played for UTA’s Movin’ Mavs and was named player of year in 2007. Gouge helped Team USA win a gold medal in the 2015 ParaPan Am Games in Toronto and currently plays professionally for the Dallas Wheelchair Mavericks. This year’s games in Rio will mark Gouge’s Paralympic debut.

University of Wisconsin at Whitewater and Becca Murray

The University of Wisconsin at Whitewater (UWW) established its Adaptive Recreation Program in 1973 when it established the UWW Wheelchair Athletics division. Since 1982, the men’s wheelchair basketball team has won 13 Intercollegiate National Championships, as well as three more from the women’s team. UWW has instituted programs such as the Cornerstones for Success-Disability Awareness Program to educate and empower students and staff on success in and out of the classroom for persons with disabilities.

Rio Star Spotlight: Becca Murray – Murray graduated from the University of Wisconsin at Whitewater in 2014 where she currently serves as the assistant coach of the women’s wheelchair basketball team under Christina Schwab. Becca was on the UWW Warhawks team for all three of the university’s women’s wheelchair basketball national championships, and won Women’s College Division Player of the Year for 2011. Furthermore, Becca won gold at the Paralympics in 2012 and will be returning to the Paralympic Games for her third time this summer in Rio.

University of Arizona and Steven Toyoji

As one of the largest adaptive athletics programs in the country, the University of Arizona (UA) offers six different collegiately competitive sports that have sent a combined 27 athletes to the Paralympics. Additionally, the UA is host to a number of inclusion awareness events and fund raisers such as, Jim Click’s Run ‘n’ Roll.

Rio Star Spotlight: Steven Toyoji –Toyoji graduated from the University of Arizona in 2009 where he competed on the adaptive track and road racing team. While attending the UA in 2007, Steven made a trip back to his home state of Washington to compete in the Bloomsdale Road Race twice, finishing second both times. He also competed twice in the Peachtree Road Race while at the UA and took first in the Los Angeles Marathon in 2008. Additionally, Toyoji won silver and bronze medals at the IPC World Championships in 2013. This year’s Games in Rio will mark Toyoji’s second Paralympic appearance.